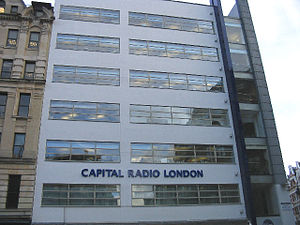 Capital FM is a network of twelve independent contemporary hit radio stations in the United Kingdom, broadcasting a mix of local and networked programming. Nine of the stations are owned and operated by Global, while the other three are owned and operated under separate franchise agreements.As of June 2018, the stations serve a combined weekly audience of 7.4 million listeners and target a core audience in the 15–34 age group; 57% of all listeners are within this demographic.Capital has a narrow playlist with only a few changes per week, featuring songs from the last one to two years. Unlike BBC Radio 1, Capital does not play rock, classic hits or alternative music.
Source : https://en.wikipedia.org/wiki/Capital_(radio_network)