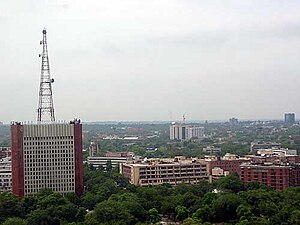 All India Radio (AIR), officially known since 1956 as Akashvani ("Voice from the Sky"), is the national public radio broadcaster of India and is a division of Prasar Bharati. It was established in 1936. It is the sister service of Prasar Bharati's Doordarshan, an Indian television broadcaster. Headquartered in the Akashvani Bhavan building in New Delhi, it houses the Drama Section, the FM Section, the National Service, and is also home to the Indian television station Doordarshan Kendra, (Delhi). All India Radio is the largest radio network in the world, and one of the largest broadcasting organizations in the world in terms of the number of languages broadcast and the spectrum of socio-economic and cultural diversity it serves. AIR’s home service comprises 420 stations located across the country, reaching nearly 92% of the country’s area and 99.19% of the total population. AIR originates programming in 23 languages and 179 dialects.
Source : https://en.wikipedia.org/wiki/All_India_Radio